Clark Moorten shares a kinship with the desert plants he lovingly cultivates. Resilient, dry (witted) and firmly rooted in fascination, the owner of Moorten Botanical Garden kicks off our interview with a sense of honesty and playfulness. “Anything you ask, I’ll talk about. If I don’t know something, I’ll make something up! That’s how you tell stories.”

Garnishing his words with a warm laugh, Clark is a born entertainer. It’s not surprising, given his esteemed lineage. “My father (Chester Moorten), he came to California in the early 20s. Got into the movies as one of the Keystone Cops, which was pretty cool.” 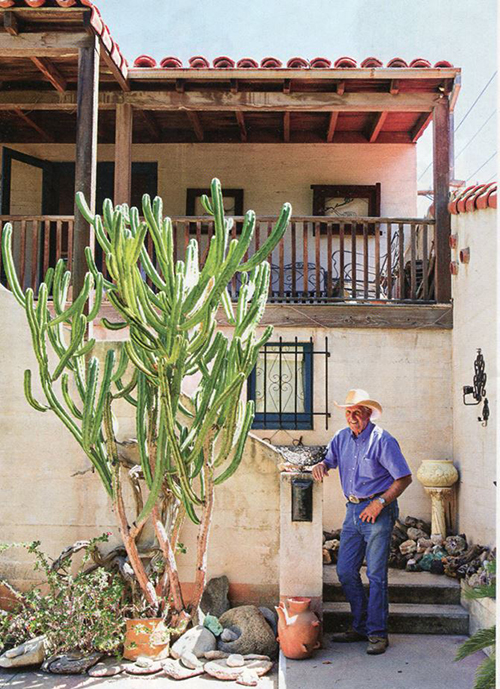 A master of understatement, Moorten narrates, “He was working on a Howard Hughes film in the late 30s when he discovered he had tuberculosis. In the 1930s, tuberculosis was pretty much a deadly disease. They told him he’d probably die, because he was 6’3” and only weighed about 135 pounds. He was rail thin. So, he decided to go to the desert against his doctor’s wishes.”

Bravery shone brightly on, he came to be called Cactus Slim Moorten by the locals. Three quarters of a century later, his son Clark chronicles Slim’s migration east by recounting, “He settled in an area that is now in Joshua Tree National Park. Just camped under a tree and eventually built a house. There was a gold ore mill that he got running again and he took over some mining claims, starting mining for gold. He started collecting desert plants off his mining claims and made a nursery.”

Supplanting passion for pay, Slim insisted on following his dreams. “Two or three years later, he decided that cactus paid better than gold.”

That’s when the Moorten’s settled in Palm Springs, and young Clark quickly dug into the family business. “We used to go out and collect tumbleweeds, package them up, put them on a railcar.  They’d ship them to the east coast and use them as window displays for Saks Fifth Avenue and Neiman Marcus, those upscale stores.”

Their plants were in vogue, but the Moorten Botanical Garden newfound success was built on a foundation that dated back decades. “When we acquired the current property that we’re in, which was in the mid-50s, there was a house that was built in 1929 on the property, and it’s still here. There were eight palm trees around the house and a couple of native trees. That’s all that was on the property. So we started moving plants and rocks and big trees in, so we created the whole garden. By the late 50s, my dad was doing a lot of landscaping, so people would come by and see what you could do with desert plants.”

One of those curious passersby was none other than Frank Sinatra.

“My father,” Moorten recalls, “had initially landscaped a house for Jimmy Van Heusen, who was Sinatra’s premiere songwriter, an Academy Award winning songwriter. Of course, through that we met Sinatra, and Sinatra bought the house that’s at Tamarisk Country Club on Frank Sinatra Drive. He engaged my father to landscape it, and that’s how we got to know Sinatra.”

Young Clark’s wide eyes studied Ol’ Blue Eyes intently, and he liked what he saw. “I met him and talked to him several times. He was really, really an amazing gentleman [pause for effect] except when he was p***ed off. But usually, he had good reason. If someone made some derogatory comment about his family heritage, well he’d bust ‘em. Y’know, he was a proud Italian. You don’t talk about mom or dad. That’s the way he was.”

Not only did Frank Sinatra respect his elders; he housed them at his palatial Palm Springs estate. “His mother lived there, and my father used to stop by there. Dolly was her name, Dolly Sinatra. She really liked my dad. He’s a pretty down to earth, desert rat person. He’d stop by and she’d say, ‘Oh Slim, you look like you need something to eat.’ She’d fix him a sandwich and give him a glass of tequila. They were really just a cool Italian family.”

Clark is simultaneously reverent and relaxed as he sums up Sinatra’s accessible charisma, noting, “He was just sort of one of the guys. Nobody bothered him. He could go into regular restaurants or hangouts and he’d say hi, you’d say hi back. He’d walk to his end of the bar or whatever – some restaurants always kept a table just for him. Amazing man.”

Pivoting from one iconic legend to the next, Moorten effortlessly switches gears. “We had also landscaped Walt Disney’s home in Palm Springs. It was over at Smoke Tree Ranch, which is still a very exclusive development. Anyways, this was back probably in the late 40’s, early 50s. Disney had a house there and my father landscaped it. I’d met him a couple times.”

The greatest children’s entertainer of all time left quite an impression on Clark. “I was only 9 or 10 years old. We went to stop by Disney’s home, it was early 50s, and he came out and said to my dad, he wanted him to meet his landscape architect, ‘cuz they were building a little amusement park down in Orange County.”

That’s right; Moorten witnessed the genesis of the happiest place on earth before it had even broken ground, and his father was ready to give the Magic Kingdom the royal treatment. “When they built Disneyland, all the desert plants, which were Joshua trees, cactus, yuccas, agaves, all that – all those plants that went in, we supplied to Disneyland. When Disneyland opened, all the desert plants in Frontierland came from Moorten’s.”

Clark once again flexes his knack for understatement by icing this sweet story with a simple, “So that was pretty cool.”

Well, he should know. Moorten has been cultivating cool for over half a century, and his legacy continues to thrive. “We’ve been here for 64 years, so a lot of the specimens are really big and mature. You see cactus that are 18 or 20 feet tall.” 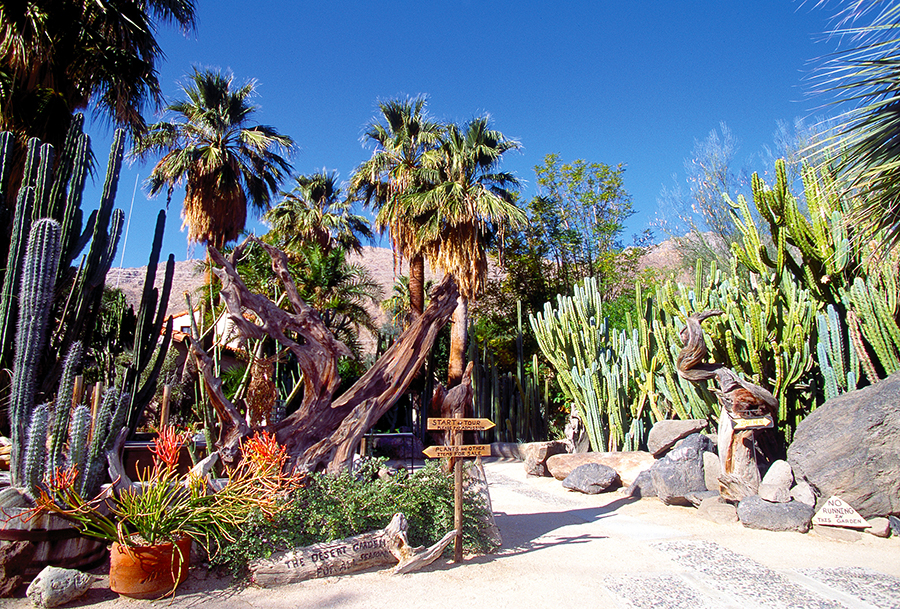 Blending spectacle with tradition, Clark keeps his parents’ spirit alive in each plant he showcases. “Probably one of the most unique features is what we call the Cactarium, which is a fancy word for a greenhouse. My mother called it a terrarium for cacti. There’s probably been about 50,000 selfies taken in there already. Thanks to social media, we’ve become quite popular. Y’know, Instagram has been my true friend.” 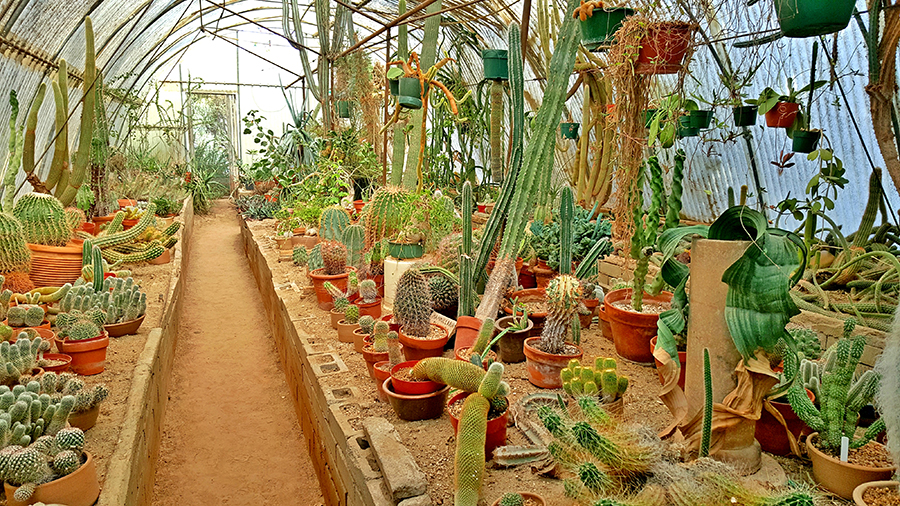 “I was born and raised in Palm Springs. My parents started all this, so this is like a family legacy. The garden, first and foremost, is a personal garden. It’s ours. We planted it and it’s a labor of love. I never thought of it as a commercial enterprise; I thought of it as my amazing garden. My mother felt that way and she instilled it in me. I look at it and say it’s got a lot of positive energy because it’s a labor of love. We were fortunate enough to be able to create it and we’re fortunate enough to be able to share it with people.”

Move over, Disneyland; we just found a new happiest place on earth.

Receive news and announcements from Palm Springs straight to your inbox